Our Lives with Shannon Fisher

Shannon Fisher is the host of The Authentic Woman and Our Lives with Shannon Fisher on the Authors on the Air Global Radio Network, a writer of social and political commentary, and among a small team of hosts of the National Press Club’s Update-1 podcast. She has a strong history of Human Rights advocacy and is well-respected in the advocacy community. Shannon was named a “Woman who Inspires” by Svaha USA and among the “Richmonders of the Year” by Style Weekly Magazine for activism in women’s rights. She is a Quora “Top Writer” and was named in the “Top 20 Most Earned Political Capital of All Time” by Planned Parenthood of Virginia. Serving on the Board of Directors for UniteWomen.org, a national 501(c)(3) advocacy organization, Shannon co-founded the organization’s Unite Against Rape campaign. For this national awareness campaign, Shannon enlisted the participation of a multitude of legislators, celebrities, and everyday men and women.

Her commentary has been published in a wide variety of media outlets, including PBS, Newsweek, The Huffington Post, Forbes, MediaShift, Press.org, The Richmond Times Dispatch, Blue Virginia, Golf Course Architecture, The Daily Kos, Apple News, Raw Story, Yahoo News, and the Chronicle of Social Change. Raising awareness of important human rights, sociological, political, and health issues is her raison d’être. Shannon loves to explore the human experience and enact positive change in the world one day, one issue, and one person at a time. She has heavily studied civic engagement, political leadership, and sociology. Shannon is a lifelong student of politics and the arts. She received a Bachelor of Arts degree from The College of William and Mary, where she studied public policy, public speaking, sociology, and performing arts. She is a graduate of the year-long Political Leaders Program at the Sorensen Institute for Political Leadership at The University of Virginia. Shannon also earned a certificate in Journalism for Social Change from the University of California, Berkeley, and she is a member of the National Press Club and the Society of Professional Journalists.

About Tamara Thorne: Tamara’s first novel was published in 1991. Since then she has written many more, including international bestsellers Haunted, Bad Things, Moonfall, and The Sorority. Tamara’s interest in writing is lifelong, as is her fascination with the paranormal, occult, mythology and folklore. She’s been an avid ghost story collector and writer all her life. Tamara’s novels range from straight-out ghost stories to tales of witchcraft, conspiracies, UFOs, elemental forces, and vampires. No matter what topic she chooses, chances are you’ll find a ghost or two lurking in the background.

About Alistair Cross: Alistair Cross’ debut novel, The Crimson Corset, a vampiric tale of terror and seduction, was an immediate bestseller earning praise from veteran vampire-lit author, Chelsea Quinn Yarbro, and New York Times bestseller, Jay Bonansinga, author of The Walking Dead series. In 2012, Alistair joined forces with international bestseller, Tamara Thorne, and as Thorne & Cross, they write – among other things – the successful Gothic series, The Ravencrest Saga. Their debut collaboration, The Cliffhouse Haunting, was a bestseller. They are currently at work on their next solo novels and a new collaborative project.

Writers On The Beat

WRITERS ON THE BEAT – Crime Writers and Crime Fighters. Your host is Gavin Reese, a retired law enforcement officer and author.

Gavin has comforted the dying, talked dozens out of suicide, and saved domestic abuse victims from their assailants. He’s taken child rapists, murderers, and human traffickers into police custody. Gavin’s had the distinct honor of protecting visiting foreign royalty and national American political figures from both sides of the aisle. He’s been trained by a variety of Special Forces operators, as well as those who trained them. Several of his friends and colleagues have been murdered or killed, and he’s occasionally been tasked to pursue those responsible.

Despite yesterday’s successes, Gavin wakes up every day and dons his gun and badge with the sincere hope to affect positive change in the lives around him. Perpetually unsatisfied with previous accomplishment, he hopes to have someday saved enough strangers that they, in turn, will collectively save him.

When not serving others, Gavin can frequently be found outdoors or involved in what his wife calls “reindeer games.” With a love of practical jokes and the long-con, Gavin’s been accused, and occasionally confirmed, shenaniganator for most of his life. He summits tall mountains, swims in deep oceans, brews mediocre beer, and has a strong opinion on the Oxford comma. His curiosity about the world and its peoples and cultures have inspired a love of travel, spontaneous adventure, and lifelong learning. Gavin knows his greatest blessing is his wife; he wakes up every day grateful she continues to share her life with him, and that she’s still willing to play along. In addition to aiding crime victims, a portion of all Gavin’s sales is donated to charities that serve law enforcement professionals, their families, and heirs, and honor the memories of our Fallen Heroes. More information and Gavin’s blog are available at his website: https://gavinreese.com/

Writers On The Beat is a proud part of the Authors on the Air Global Radio Network. https://www.authorsontheair.com/

Learn More About Writers On The Beat

Christie Stratos is an award-winning writer who holds a degree in English Literature. She is the author of Anatomy of a Darkened Heart and Brotherhood of Secrets, the first two books in the Dark Victoriana Collection. Christie has had short stories and poetry published in Ginosko Literary Journal, Andromedae Review, 99 Fiction, and various anthologies. An avid reader of all genres and world literature, Christie reads everything from bestsellers to classics to indies.

We are part of Authors on the Air Global Radio Network: https://soundcloud.com/authorsontheair. 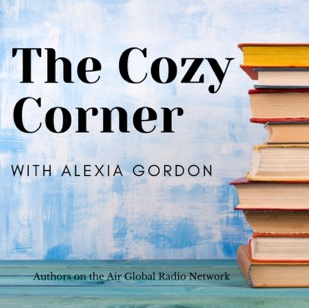 You can find Cozy Corner with Alexia Gordon:

This is a copyrighted podcast proudly owned by the Authors on the Air Global Radio Network. Listen to podcasts on our website, Soundcloud.com/authorsontheair, on https://anchor.fm/alexia-gordon, or your favorite podcast listening platform.

Criminal Mischief: The Art and Science of Crime Fiction

Crime fiction and criminal investigations are equal parts art and science. Creating compelling crime stories that ring true requires attention to character, plot, POV, voice, and so much more as well as an understanding of forensic science and criminal investigative techniques. Join me and let’s explore all things crime, fictional and real. Kevin Deutsch is an award-winning true-crime writer, working private investigator, host of the true-crime podcast “A Dark Turn,” and author of two books: “The Triangle: A Year on the Ground with New York’s Bloods and Crips,” and “Pill City: How Two Honor Roll Students Foiled the Feds and Built a Drug Empire.” He has worked on staff at various newspapers including the New York Daily News, Newsday, The Miami Herald, and The Palm Beach Post. His work has also appeared in Newsweek, The New York Times, The New York Post, The Orlando Sentinel, The Forward, The Independent, and other publications. A member of PEN America, Deutsch is currently at work on a new book about a series of unsolved murders and abductions in Boca Raton, Fla.
You can buy his books at Amazon, by clicking this link.

The Romance Show with Vanessa Fewings